Interesting buildings and houses with unusual architecture, located in different parts of Russia:

Local call this unusual mansion, attracting the attention of many tourists, the "egg Faberge." Despite its original shape, this building is an ordinary residential building. The authors of the project, originally intended for Bethlehem, where the construction of the maternity hospital was planned, are Sergei Tkachenko and Oleg Dubrovsky. However, Israeli city planners rejected this bold idea, and the project was implemented in the center of Moscow.

House in the form of a ship (Borovo settlement, Kemerovo region) 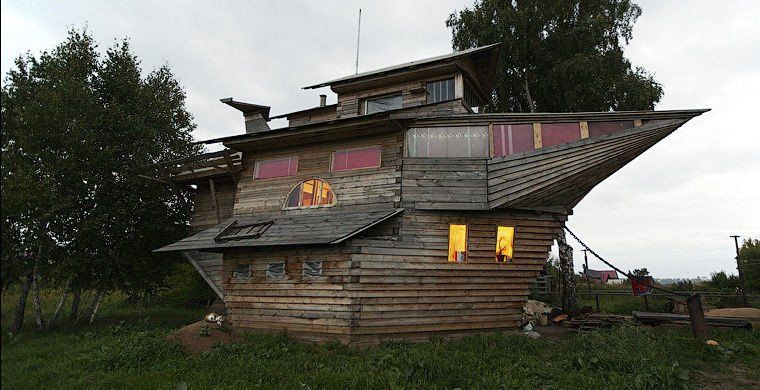 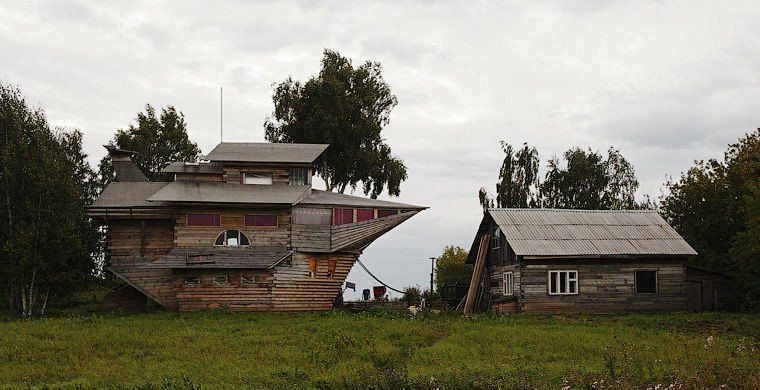 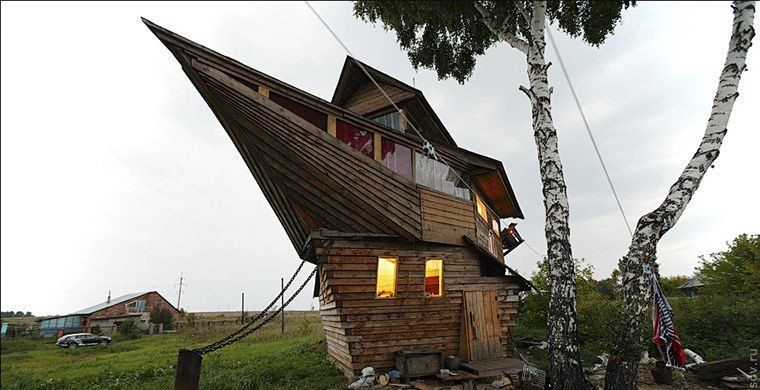 The villagers nicknamed this house "Nikolayev's ark", as it is the offspring of a local craftsman named Nikolai. According to the author, "the hut with the edge," as he likes to call his creation, dreamed of him in a dream, after which he immediately began to build. In the house there is a living room, a bedroom, a children's room, a sauna, a swimming pool and a greenhouse. It is noteworthy that all this was built without a single drawing. 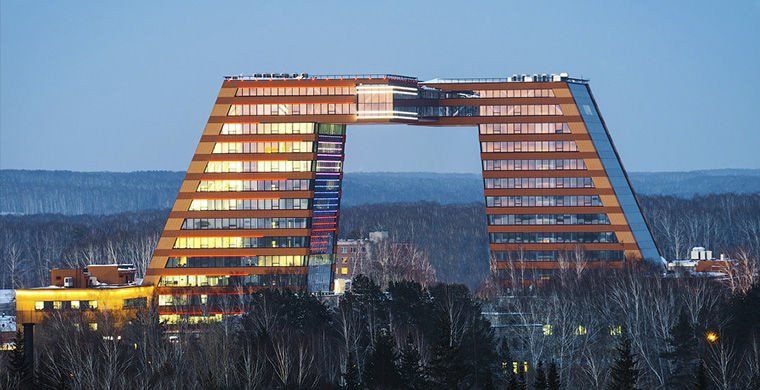 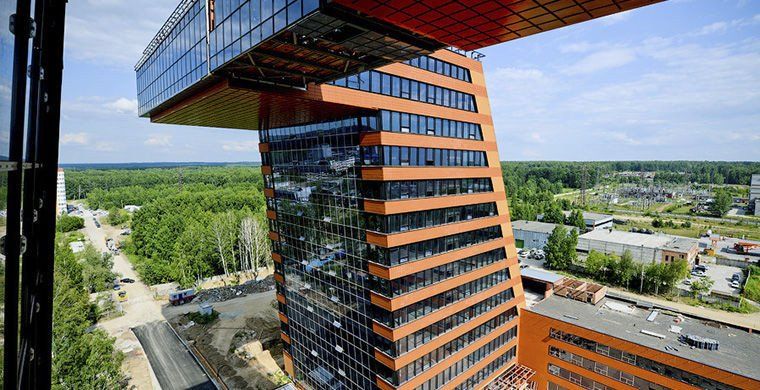 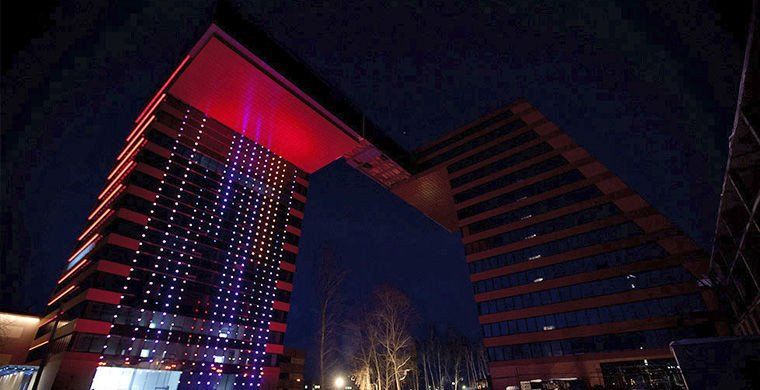 The building of an unusual form adorns the Novosibirsk Academgorodok. Of the three declared buildings, there are already two. Technopark is the center of attraction of representatives of IT-community of the capital of Siberia, and also the owner of the premium "House of the Year" in the nomination "Information Technologies". 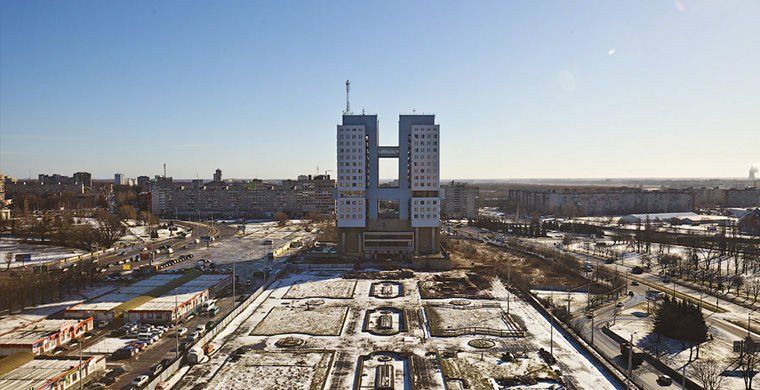 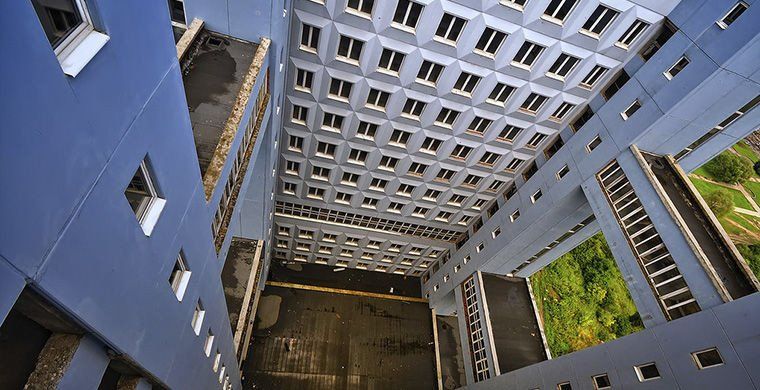 The main long-term construction of Kaliningrad has many names: "Monster", "Robbed Robot", "SpongeBob". Local residents have conflicting feelings for him, as this 28-story high-rise was built practically on the ruins of the Konigsberg royal castle, which was the last seat of the famous Amber Room. 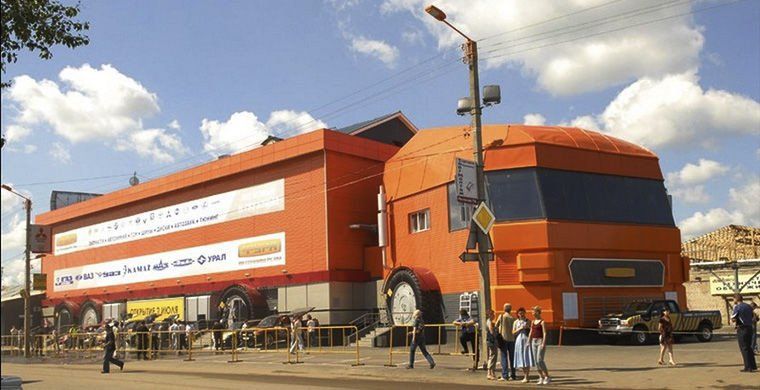 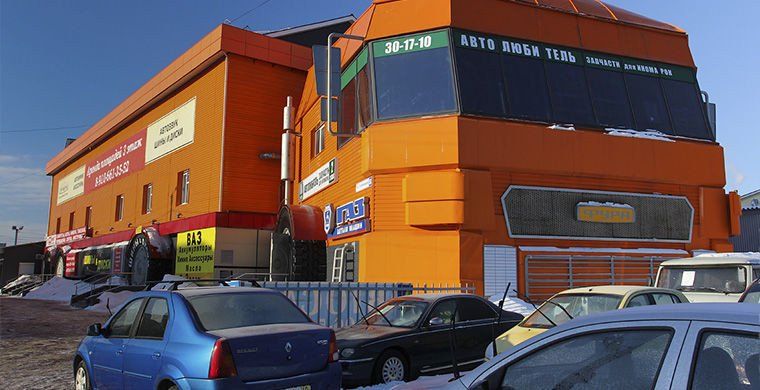 The first, the only and largest department store for auto parts of the original design in Russia is listed in the Guinness Book of Records. Kostroma avtouniversam in the form of a wagon performed on a scale of more than 1:20. 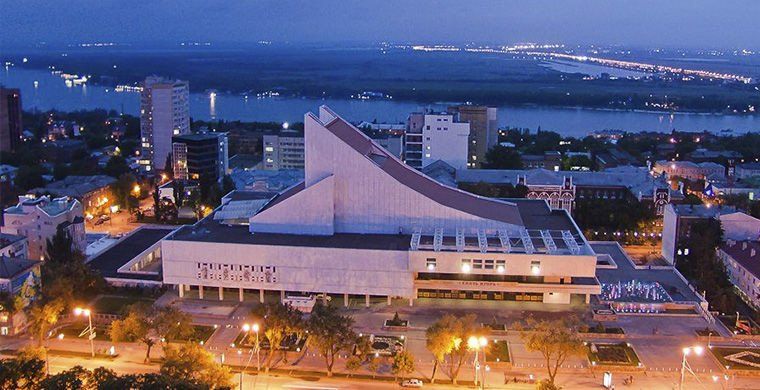 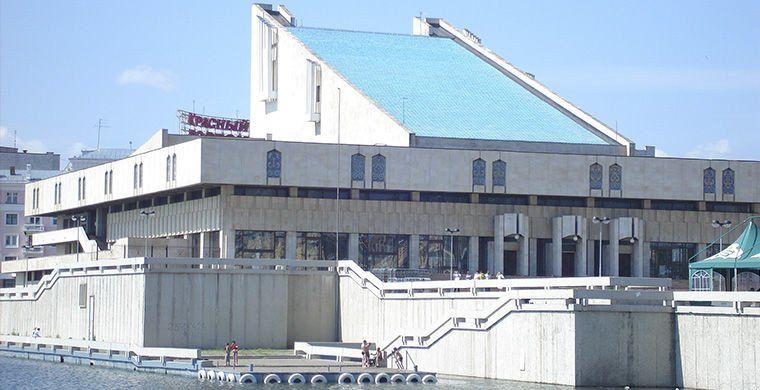 The architecture of the building, rightfully considered a cultural monument, resembles an open grand piano. Old-timers call it a monument to Soviet long-term construction, as the construction of the building stretched as much as 22 years. However, this does not in the least hinder the temple of arts to be one of the largest theaters in the south of Russia. 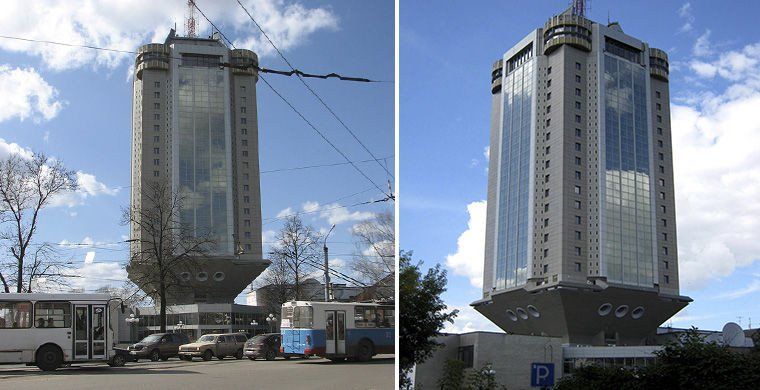 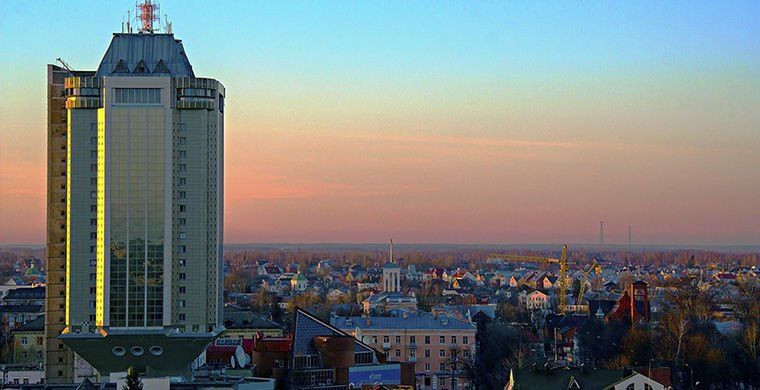 Initially, the building was built in the 1980 Olympics as a hotel "Tverskaya". The 22-story skyscraper is one of the tallest buildings in the city and looks very much unstable, for which the local dubbed it "The Glass." However, the owners claim that rumors about a shaky foundation and inadmissible slope are nothing more than idle inventions. 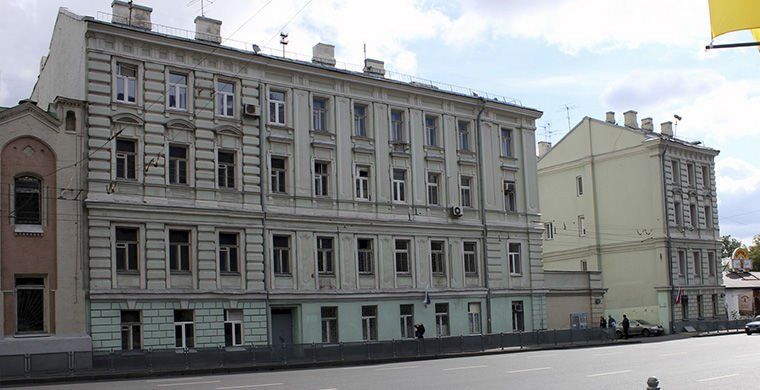 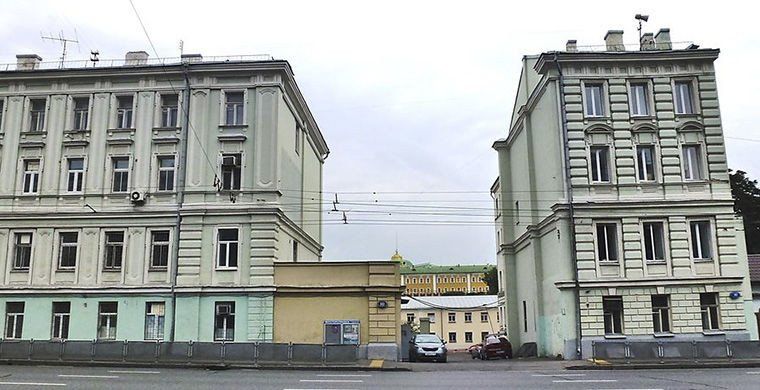 Before the Great Patriotic War, these two buildings were one house. In 1941, during one of the first air raids on Moscow, the building was seriously damaged. The gap was not restored, having restored the surviving parts of the house.

House in the form of a ship (Ivanovo) 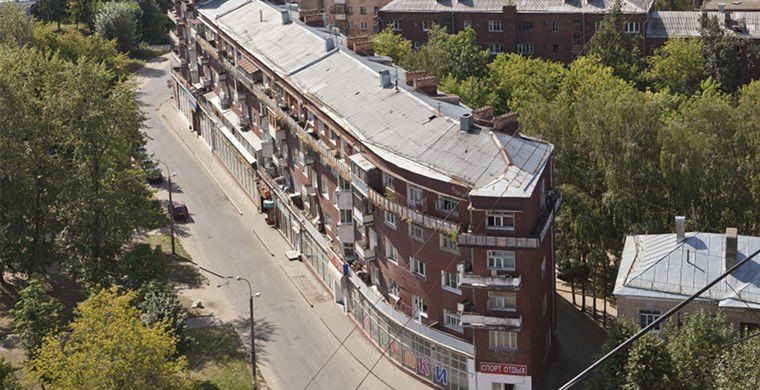 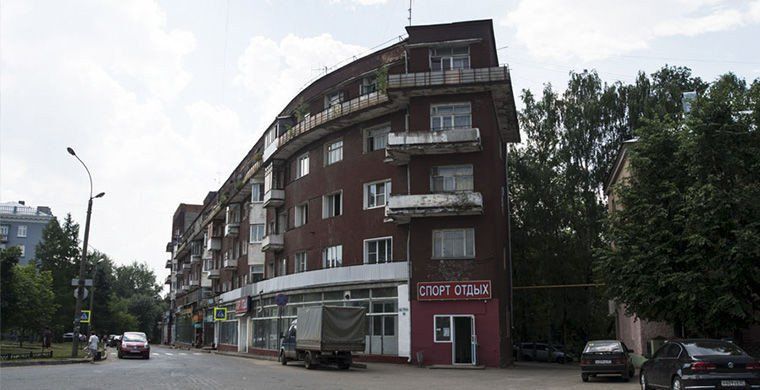 An unusual building, called the local "house-ship", was built in the 1920s. The house acquires a special resemblance to the cruise liner in rainy weather: an 8-storey tower imitates the stern, glass showcases on the ground floor visually lift it above the ground, balconies resemble the deck, and the pointed end of the house is the nose of the ship. They say that in Soviet times it was enough to write on the letter the address: "Ivanovo City, House-ship", without indicating the street and house number, and it surely reached its destination - this house was well known to the inhabitants of the city. 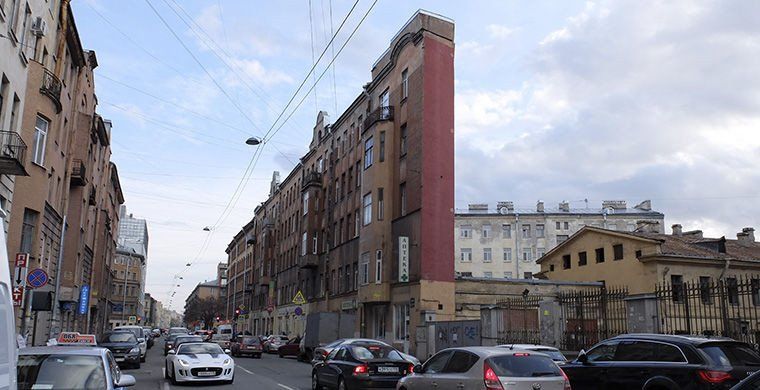 The house of unusual shape, creating the impression of a giant props, causes bewilderment among tourists. Looking at it from a certain angle, it's hard to imagine people living in such a flat building. The house was built at the beginning of the last century by the architect Quart. By the way, there are several such houses in St. Petersburg. 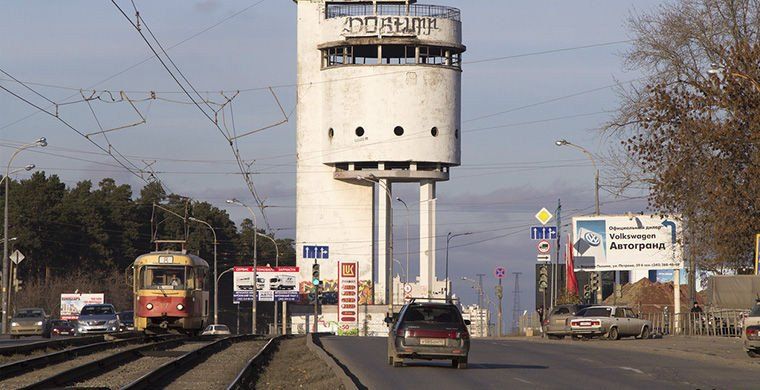 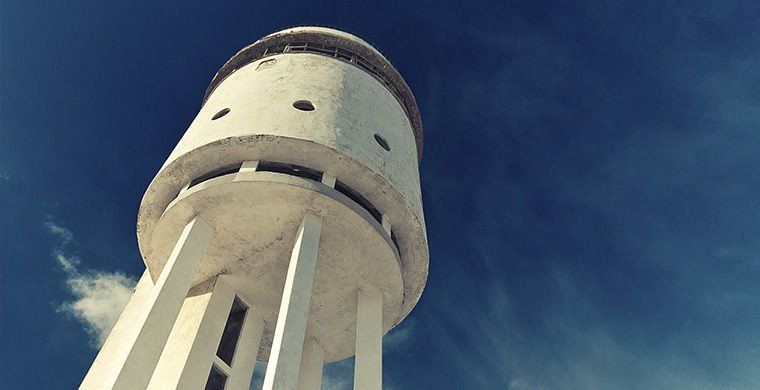 The tower is an unofficial symbol of an era. In the 1930s, this water tower was the largest in the world: its reservoir at that time was simply huge. Prototypes of the White Tower are in different countries: one of them is in China, near one of the dairy factories. In the capital of the Urals, the White Tower is popular. The architectural festival held in Yekaterinburg every year is named in her honor.