When did the tourists put the tent on the slope of Holatchahll?

What was the official point of view on events related to the death of the Djatlov group by the middle of March 1959?
On the basis of the study of the group's tracks in the labaz district (found, recall, on March 2, 1959), the diaries of the members of the group found in the tent (Doroshenko, Dyatlova, Kolmogorova, Krivonischenko and Thibo- Brignol) were considered proven that on January 31, 1959 the group came to the foot of the Holat-Sahyl and even made an attempt to climb the slope. Strong wind forced tourists to return to the river Auspia and to spend the night in the forest in front of the mountain. The night on February 1 passed safely, the group got up late, well rested. Some time after the recovery was spent on preparation and food intake, after which the tourists proceeded to the device of the storage.
The extension from the Auspii Valley up the slope of the Holat-Sahyl River was followed at approximately 15 hours, that is, rather late, taking into account the short duration of the day's light. Sunset on 1 February. follow, according to the calendar, at 17:02. In the cameras of the members of the group found in the tent, footage taken in low light conditions was found (now these photographs are widely distributed on the Internet, in particular they can be seen in a very informative selection of photographic materials compiled by Aleksey Aleksandrovich Koskin, a researcher of the Diatlov group tragedy). Prosecutor-criminalist Ivanov, assessing the quality of images and photosensitivity of the film (equal to 65 units), determined the time of photographing - about 17 hours. That is, according to the investigator, the last shots were taken just before the sun set, in the evening twilight.

These photos are considered the latest photos of Igor Dyatlov's group. The investigation considered that the photographs were taken about 17 hours on February 1, 1959, during the group's ascent to the pass and setting up a tent on the slope of Holatchahl. 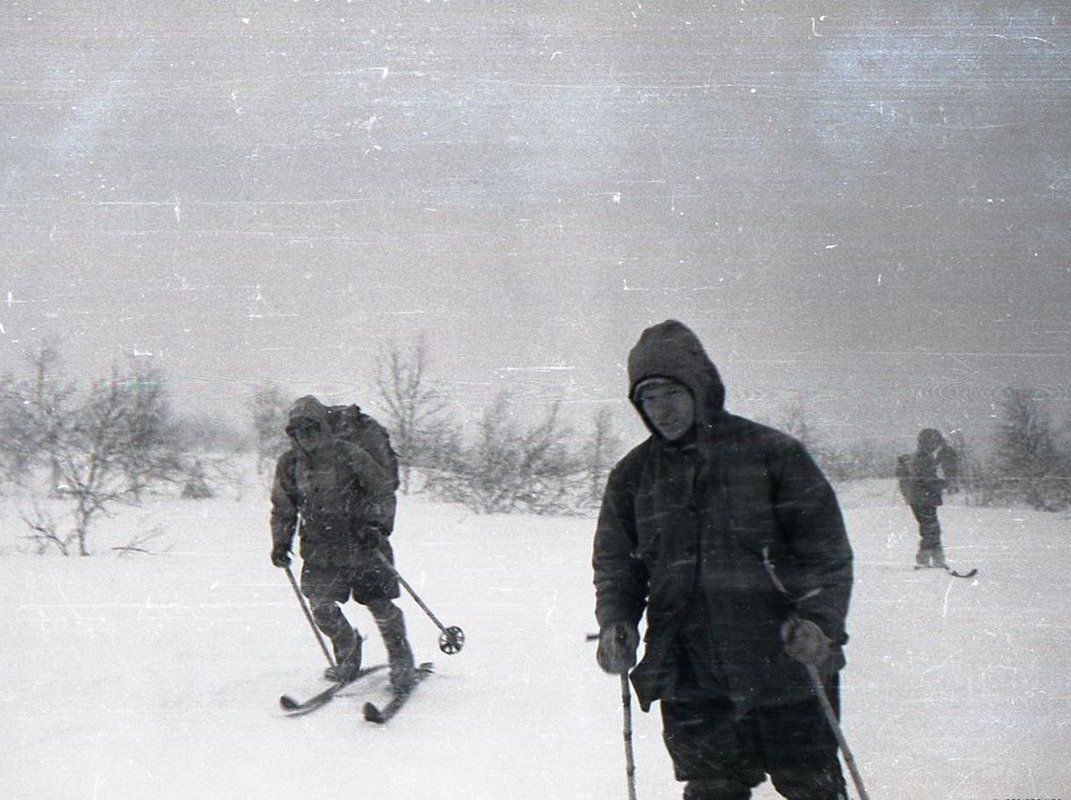 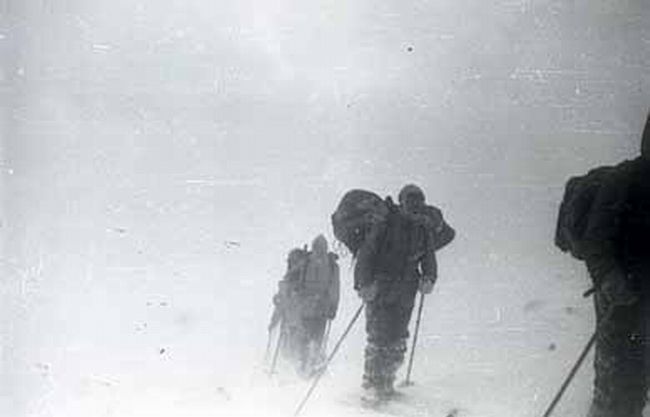 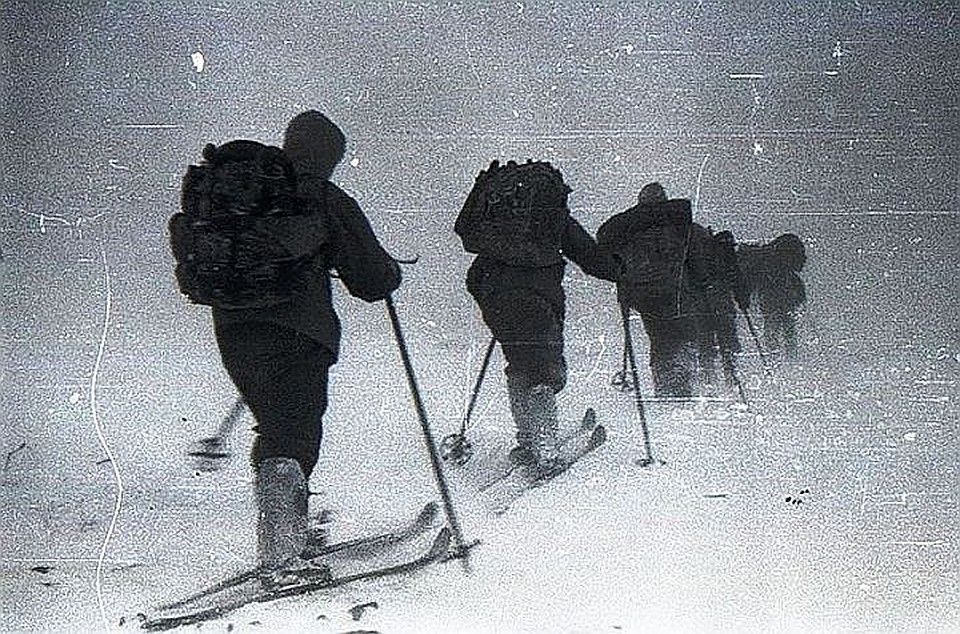 They go to a meeting with an inexplicable force that will unleash this tragedy. 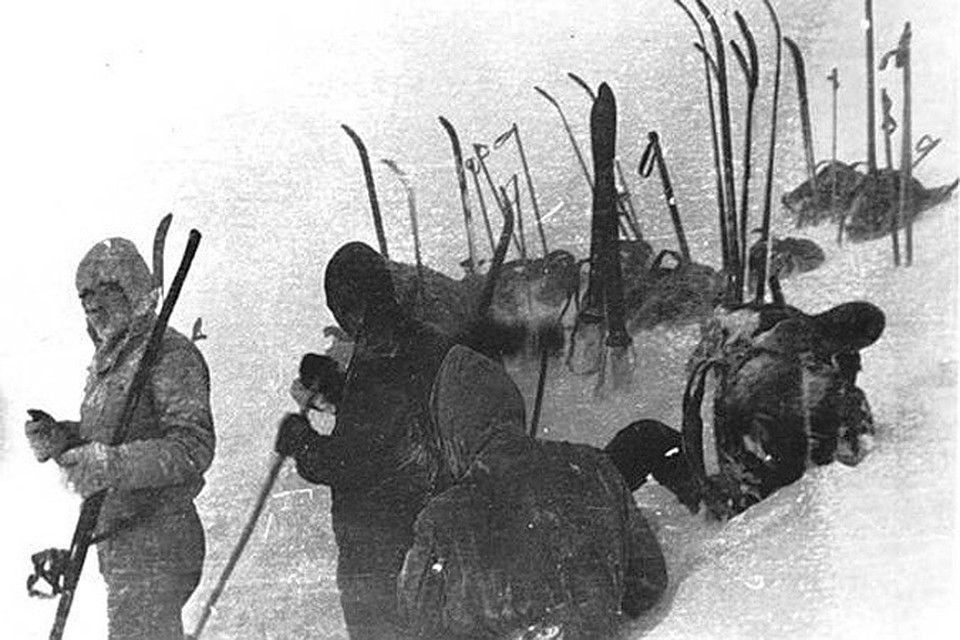 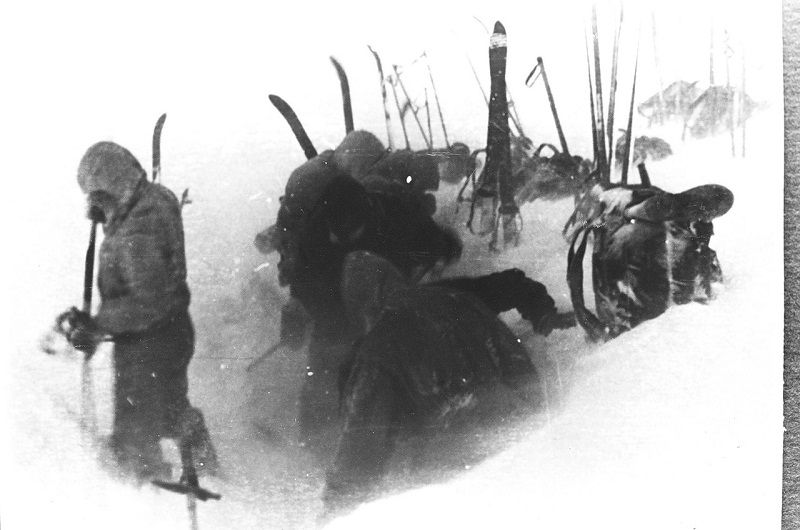 The last tent setting, the last night in their lives - the tragic chain of events is launched.

By the way, in the question of determining the time of the last photos, investigator Ivanov made a gross mistake, which must be indicated here, since it will be very important for understanding what happened to the deceased group. The fact is that on March 1, 1957, the division of the USSR into time zones underwent a significant change, as a result of which the Sverdlovsk region was included in the group of regions having an amendment to the time of the Greenwich meridian +5 hours. Until then, the Sverdlovsk Region was in the belt in the amendment to 1 hour less and this much better corresponded to local time. The March 1957 reform of time zones in general was quite ridiculous and led to numerous absurd incidents, for example, Vorkuta, located much east of Sverdlovsk, began to live in Moscow time, and Sverdlovsk "left" for 2 + hours (which, in fact, , is contrary to both common sense and life experience, since a person flying from Vorkuta to Sverdlovsk "lost" 2 hours due to the transfer of hour hands, but at the same time he received the same hours due to lengthening the daylight hours. The Soviets did not get used to idiotic reforms "dear Nikita Sergeevich").

In the context of our narrative, it should be noted that prosecutor-criminal Ivanov, as well as all search engines, lived according to Sverdlovsk time. And when drawing up all his documents, he was also guided by the time of Sverdlovsk. However, the "Sverdlovsk noon" did not correspond to the "astronomical afternoon" for Holatchahl, and moreover, he did not even correspond to that for Sverdlovsk itself. In addition, the duration of the day, calculated by astronomers for the regional center, did not coincide with that for the northern regions of the region due to its large extent in the meridian direction. This obvious, in general, thought, apparently, did not visit the head of the criminal prosecutor not only in 1959, when he was investigating the case, but 30 years too late, when he began to broadcast with considerable pomp in numerous interviews about his outstanding observations and discoveries related to this investigation. In other words, the investigator thinking of the head would never have written that about 17 hours on February 1, at 61 °
Since the master of search cases did not find out the exact time of sunrise and sunset on the breadth of the mountain of Holat-Sahyl on February 1, we will have to do it ourselves. First, we determine the correction for the astronomical half-day on the Dyatlov Pass relative to the belt time (that is, Sverdlovsk): П = Dm - [(Tm-Tomsk) + 3 + Ln]. In this formula, Dm is the exact time for a given longitude of the site, Tm is the time of the time zone, Tomsk is the Moscow time, and Ln is the summer time correction (in our case, Ln = 0). Geographic longitude of the pass
The required correction is: P = (59 ° * 4 min + 27 * * 4 sec.) - [2 hours + 3 hours + 0 hours] = (236 minutes + 108 seconds) - 5 hours = 3 hours. 57 minutes.48 seconds-5 hours = -1 hour. 2 minutes. 12 seconds
Thus. the true noon on the slope of the Holatchahl attacked not at 12 noon on Sverdlovsk time, but at 1 hour.2 minutes.12 seconds. later, ie at 13:02 (rounding up to minutes). Quite noticeable error, which in the summer, by the way, increased by another hour.
In winter, the duration of the daylight is noticeably reduced when moving from south to north. On February 1, at 58 ° N, its duration is 8 hours. We calculate that on February 1 the light time of the day was 7 hours 32 minutes (this calculation is approximate, since the meridian is strictly not a circle (the Earth is flattened from the poles!) And therefore the law of changing the length of the light day will in fact be nonlinear, but for the purposes of our study, the error within a minute is completely acceptable.). Having learned the length of the light day and knowing the time of the true half-day, it is not difficult to find out the time of sunrise and sunset. On February 1, 1959, the Sun at the latitude of Kholatchahl ascended at 9:16, and went at 16:48 (seconds are rejected in the calculation).

However, the result obtained, although different from that of investigators, is still not final and correct. Taking into account that our calculation is made for an even horizon, and the Djatlov group was in a mountainous area, which "uprooted" the horizon upwards, it is necessary to introduce a correction for the distortion of the horizon line.
For this we turn to the map of the area depicting the course of the Auspia River and the location of the storage, made, as you know, on the site of the last stop of tourists in the forest zone. The height of the terrain above the sea level, where the storage was constructed, is about 650 m. The spurs of the Ural Ridge to the south-west, whose elevation above the level of the camp (and the camp of the "dyatlovites") reaches 300-350 m. to obscure the low winter sun on February 1, and if "yes", then how much did this happen?
Such a calculation is not particularly difficult (of course, this does not apply to prosecutors Ivanov and Tempalov, who did not bother to conduct it). On the shirny, the height of the midday stand of the Sun grows at an average rate of 1 ° per week. That is, on February 1, the height of the midday Sun, seen by members of the Djatlov group,
a moment past the zenith Sun had to "dive" for them. The slope blocked the sunlight falling into the Auspii valley at 14:34, at that moment the tourists could admire them for the last time (provided, of course, that the clouds allowed). More in their life they did not have to do this. From that moment, the group of Djatlov was in the zone of increasingly dusk.

All these calculations have, of course, a certain error, which is connected, not only and not so much with inaccurate calculations, as with the uncertainty of the location of the camp and the inevitable inaccuracy of the maps. But all these errors do not cancel the fundamental conclusion we drawn: the tourists found themselves in the dark much earlier than the investigators thought. It must be acknowledged that there is no need to speak about any "about 17 hours" photoshooting in the conditions of sunset at 14:34 (or about this time). Especially on a film with low photosensitivity, which was in the cameras of tourists (all of them used a film of 65 units, while for shooting in the twilight, then a more sensitive one was used - 130 units). The last photos of "dyatlovtsev" were made in conditions of poor visibility - low clouds and snowstorms, which also objectively should have worsened the conditions of photography. Nevertheless, the photos still turned out and their quality is quite satisfactory. And this means that the photography was carried out under conditions of relatively good illumination. The last photographs were made much earlier than the time that Ivanov and Tempalov supposed, at the latest, at around 15 o'clock, apparently immediately after leaving the forest on the slope.
The foregoing mathematical and astronomical considerations are not gymnastics for the mind at all, but pursue a purely practical goal. They allow us to make a fundamentally important conclusion that on the last day of their trip the group admitted a fundamental error connected with an incorrect estimate of the duration of a daylight. In the previous days, the "woodpeckers" moved along the Auspiya River and observed a gradually rising terrain, which did not cause any interference to sunlight. In this sense, even trees in the forest and low clouds interfered with them much more. Tourists no doubt knew that the light-day on Auspia is noticeably shorter than Sverdlovsk and when planning its actions, they made the necessary amendment to this. But on February 1 they found themselves in a completely new locality. If the mountains surrounding them, likened to a bowl with uneven edges, then their camp was at its very bottom. February 1 The sun appeared from behind the mountains later than usual, but disappeared behind the mountains before. If the members of the group had made an amendment to a much shorter light day, there would have been no "passive recovery" for them, and they would have laid them up the night before.
In the middle of the day on February 1, drawing attention to the fact that the Sun will soon be hidden behind the mountains, they undoubtedly accelerated the gathering. It happened around 14 hours, sooner rather than later. The group, which was already behind schedule, suddenly faced the threat of losing in vain all day! The fees were as quick as possible and, I think, the tourists left the place for the night before sunset, that is, before 15:00, on which the investigators were oriented. Tourists moved with all possible speed in the face of increasingly deteriorating lighting (we are not yet talking about a possible snowfall, a blizzard, etc. nuances of winter weather - this is a very special talk). The transition did not last long, about an hour and a half, if not less, because of this, the "Dyatlovites" and on February 1 passed very little - less than 2 km.
The mistake made by tourists was of fundamental importance. It was she who launched a chain of events, the inexorable logic of which led the group to death in a few hours. What can this shift in time mean with respect to the fate of the group Dyatlov we still have to say in this essay.