Russia is also officially Russian Federation, in practice, the abbreviation RF is used - a sovereign state in Eastern Europe and North Asia. Population: 146,880,432. (2018). The territory of Russia, defined by its Constitution, is 17 125 191 km ². It occupies the first place in the world in terms of territory, the sixth - in terms of GDP in terms of PPP and the ninth in terms of population.

The territory of Russia, defined by its constitution, is 17 125 191 km² (the first place by the area among the countries of the world), which is slightly less than the continent of South America. It is located entirely in the Northern Hemisphere, most of the territory of Russia is located in the Eastern Hemisphere, only the eastern part of the Chukotka Autonomous Okrug is located in the Western Hemisphere. It is washed by the waters of the Pacific and Arctic Oceans, and also by the Baltic, Black, Azov seas of the Atlantic Ocean, possessing the longest coastal line in the world (37,653 km). Russia is located in the north of the continent of Eurasia, occupying most of Eastern Europe and the whole north of Asia. The Ural Mountains and the Kumo-Manych Basin divide Russia into the European and Asian parts.

Russia is one of the most water-stressed countries in the world. The country has one of the world's largest reserves of fresh water. Surface waters occupy 12.4% of the territory of Russia, while 84% of the surface waters are concentrated to the east of the Urals. In the structure of water use, production needs prevail.
The largest freshwater lake in Baikal is located in the eastern part of the country (about 31,700 km²), is the deepest lake in the world.

The country is rich in various minerals. Oil reserves are explored in one or another volume in many regions of the country, in particular, in the Tyumen region, on Sakhalin, in Bashkortostan, as well as on the shelf, and natural gas reserves in the Yamal-Nenets Autonomous District.

The position of Russia in the northern part of Eurasia (the territory of the country mainly lies to the north of 50 ° N) determined its location in the arctic, subarctic, temperate and partly in the subtropical climatic zones. The predominant part of the territory is located in the temperate zone. The diversity of climate also depends on the characteristics of the terrain and proximity or remoteness of the ocean.
Latitudinal zoning is most clearly manifested in the plains. The most complete spectrum of natural zones distinguishes the European part of the country, where from north to south the zone of arctic deserts, tundra, forest-tundra, taiga forests, mixed forests, forest-steppes, steppes, semi-deserts are successively replaced. With the eastward progress the climate becomes more and more continental, the number of natural zones in one latitude interval is significantly reduced.
The average temperatures in January, in different regions, range from +6 to -50 ° C, in July from 1 to 25 ° C; precipitation from 150 to 2000 mm per year. Permafrost (areas of the north of the European part, Siberia and the Far East) occupies 65% of the territory of Russia.
The highest ever recorded temperature in the territory of modern Russia was +45.4 ° C at the meteorological station Utta (Kalmykia) [28], measured on July 12, 2010. The lowest temperature was unofficially recorded in Oimyakon by Academician Sergei Obruchev in the winter of 1924 and amounted to -71.2 ° C [29], although lower temperatures were also reported. The maximum temperature difference: 116.6 ° C, according to this indicator, Russia ranks first in the world. 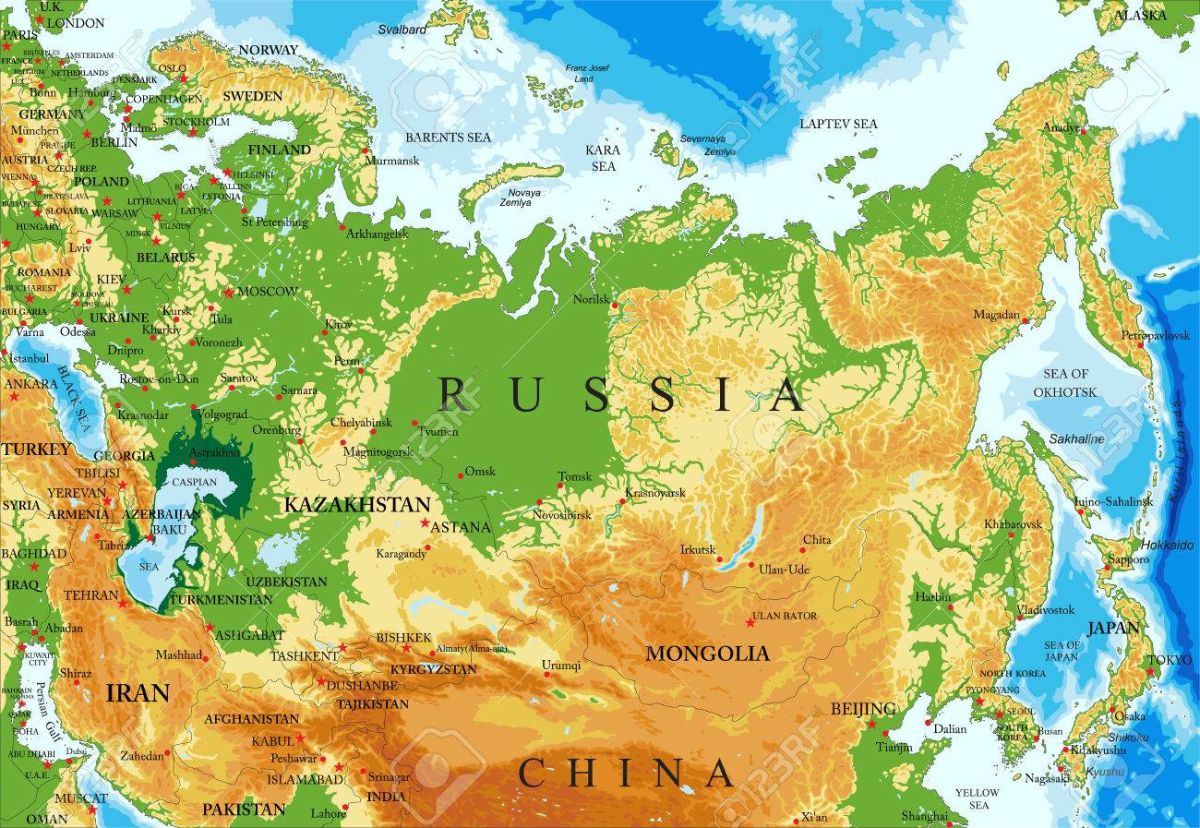 Map of Russia and neighboring countries.

Map of Russia with division into regions and districts.

Below is a list of cities in Russia, about which we want to tell. By clicking on the name of the city you will be taken to a separate page dedicated to this city.