The largest city in the Volga Federal District and on the Volga River. It was founded, presumably, on February 4, 1221 by Vladimir Prince Yuri Vsevolodovich.
Located in the center of the East European Plain at the confluence of the Oka and the Volga. Oka divides the city into two parts: the mountainous - the upper, on the Djatlovy Mountains, and the river - the lower, on its left low bank. Volga shares Nizhny Novgorod and Bor. 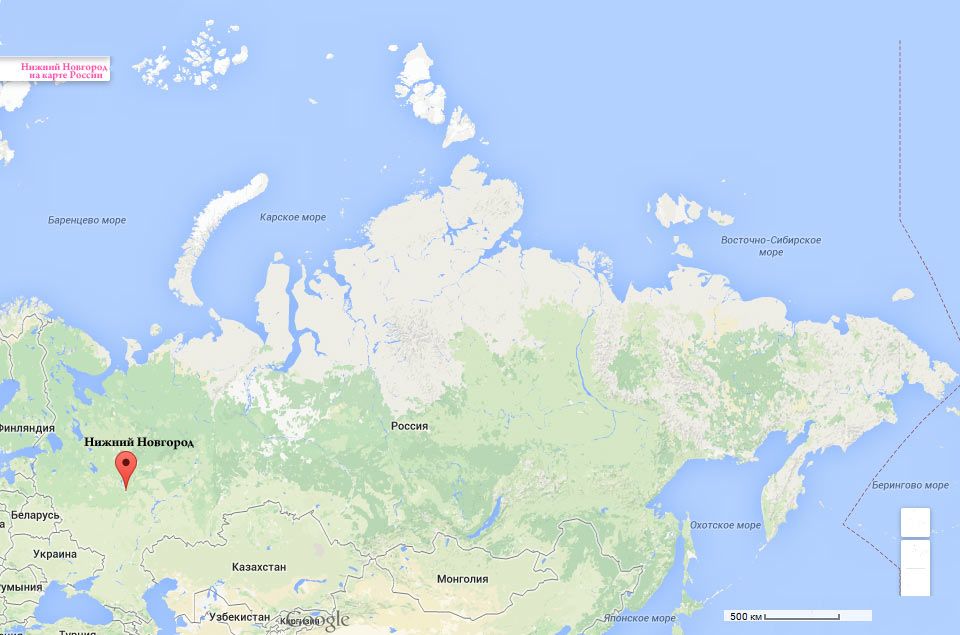 In the 1500-1515 years a stone Kremlin was built, which was never taken in all history. Under his walls in 1612, the zemstvo elder Kuzma Minin raised funds and, together with Prince Pozharsky, organized a people's militia to liberate Moscow from the Poles. Since 1817, with the transfer to the city of Makarevskaya Fair, located earlier near Zheltovodsky Makariyev Monastery, it becomes one of the largest shopping centers in Russia. In 1896, the city hosted the All-Russian Art and Industry Exhibition, which gave the Russian tram the development. During the Soviet industrialization of the 1930s large machine-building enterprises were built there, including the largest auto giant - the Gorky Automobile Plant (GAZ). During the Great Patriotic War of 1941-1945 the city was the largest supplier of military equipment, due to which it was bombed, the most powerful in the entire Middle Volga region. After the war, the city was awarded the Order of Lenin. November 20, 1985 in the city was launched the first section of the subway. Chronologically this is the third subway in Russia and the tenth in the USSR.
Nizhny Novgorod is an important economic, industrial, scientific, educational and cultural center of Russia, the largest transport hub and administrative center of the Volga Federal District. It is one of the main directions of river tourism in Russia. The historical part of the city is rich in sights and is a popular tourist center.
Nizhny Novgorod is located at the junction of the two largest waterways of the European part of Russia - the rivers of the Volga and the Oka. The city is divided into two parts: the eastern, elevated Nagornaya, located along the right banks of the Oka and the Volga in the northwestern extremity of the Volga Upland - the Dyatlovy Mountains, and the western (on the left bank of the Oka and the right bank of the Volga) low and gorgeous.
The climate in Nizhny Novgorod is moderately continental, with a cold long winter and a warm, relatively short summer. Because of the large differences in the terrain in the river part of the city, it is somewhat warmer than in the mountainous part. Precipitation on it on average a year falls by 15-20% more. The average monthly multi-year temperatures in lowland areas vary from -11.6 ° C in January to + 18.4 ° C in July, in mountain areas from -12 ° C in January to + 18.1 ° C in July. The average annual temperature is + 4.8 ° C; wind speed - 2,8 m / s; air humidity is 76%.
The sun in the Lower for the year shines about 1775 hours. The maximum duration of a day in June, 17 hours 44 minutes, the minimum - in December, 6 hours and 52 minutes. Cloudiness in winter is quite high: 75-80% of the time the sky is covered with clouds, and from April to August, the probability of a clear sky is already 49-56%. In the autumn-winter period, the sky is more often covered by clouds in the mornings, and in the daytime the weather clears up. In spring and summer, on the contrary, cloudless mainly in the mornings, by the middle of the day there are powerful cumulus clouds that disappear by the evening.
Due to the greater continentality of the climate in summer, the temperature in Nizhny Novgorod is slightly higher than in Moscow, and in winter it is lower. In spring, the positive temperature is usually set around April 5 and remains until the end of October. Precipitation averages 653 mm per year, the largest number - in July, the smallest - in March. On average, there are 180 days with precipitation in a year. Snow begins to fall in October, but a steady snow cover falls in late November and collapses by mid-April. As a rule, the air temperature fluctuates weakly in winter and amounts to -10 ... -20 ° C. Occasionally there are winter thunderstorms.
In Nizhny Novgorod, as in any other major industrial center, there is a problem of environmental pollution. Groundwater, small reservoirs, main sources of water intake - Oka and Volga rivers are subject to severe anthropogenic impact. Due to built hydroelectric power stations and waste water discharge in the Volga, there is a high bacterial contamination that does not allow using it for recreational purposes and forces chlorinating drinking water with higher doses.
Nizhny Novgorod is the largest center of river cruise tourism in Russia.
Nizhny Novgorod is a city with a rich history, almost 800 years long.
The center of Nizhny Novgorod, by right, is the ancient Nizhny Novgorod Kremlin of the early 16th century - a two kilometer brick fortress with 13 towers. On the territory of the Kremlin there were many temples, but at the moment only the St. Michael the Archangel Cathedral, built not later than the middle of the 16th century, rebuilt in 1628-1631 and is the oldest surviving in the Kremlin buildings, was preserved.
The railway appeared in 1862, and the first car - in 1896 [15]. Now Nizhny Novgorod is a major transport hub. In the city there are: a railway station, a river station, a cargo port, several berths for cargo handling. Cable car. The length of the road is 3661 meters, it has the largest unsupported span in Europe above the water surface - 861 meters. 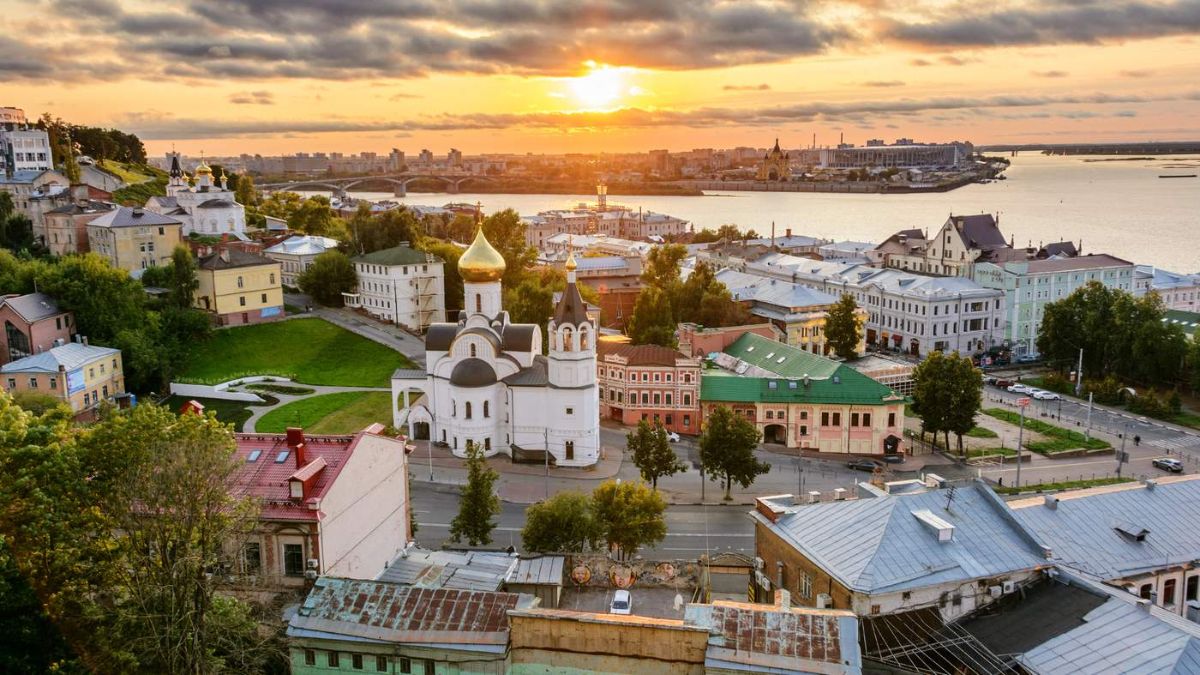 Arrow of Oka and Volga 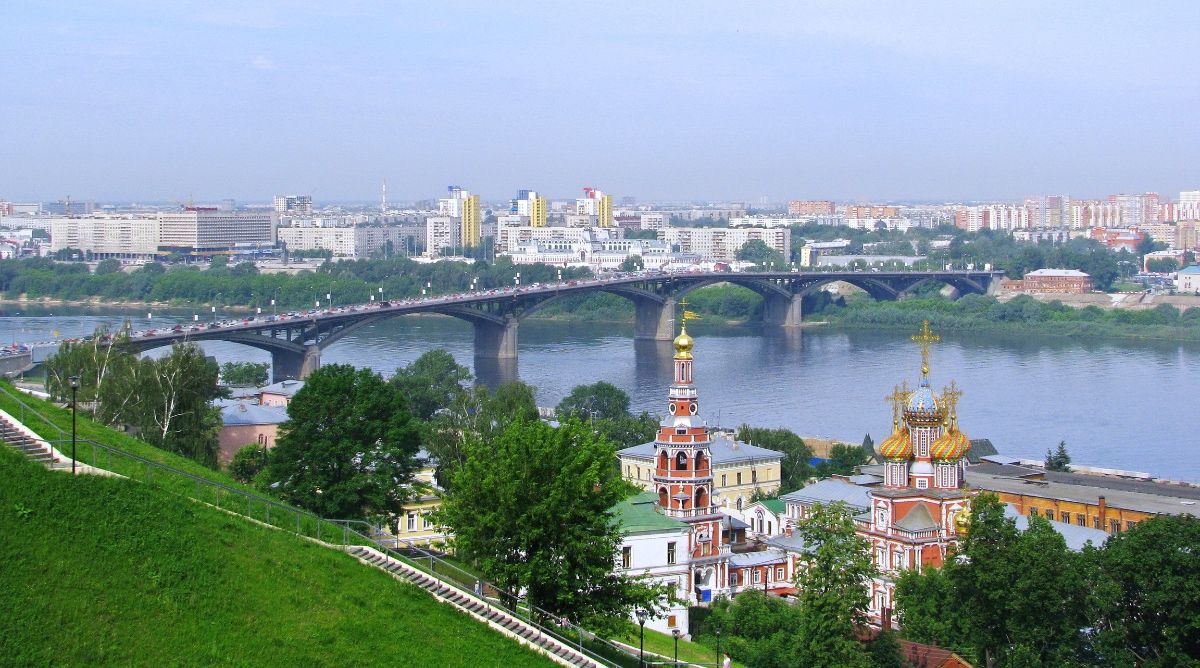 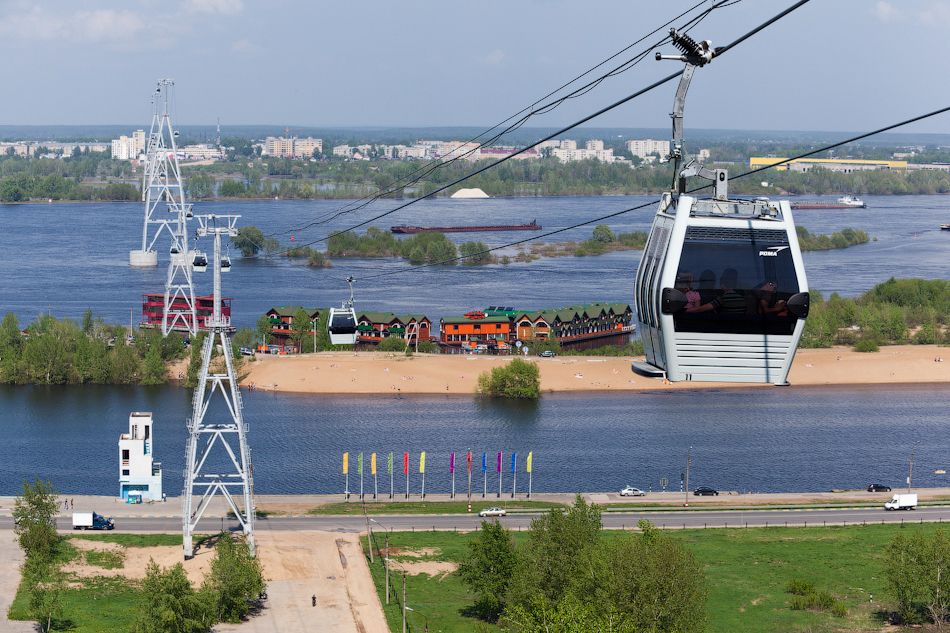