Krasnoyarsk is one of the largest cities in Russia.

Founded in 1628, is the largest of the ancient cities of Siberia. During the "gold rush" for a long time was a large prosperous merchant center of Siberia. The most eastern city is a millionaire in Russia.

The city is located in the center of Russia, on both banks of the Yenisei at the junction of the West Siberian Plain, the Central Siberian Plateau and the Sayan Mountains in the gorge formed by the northernmost spurs of the Eastern Sayan.
The population of the city is 1,082,933 (2017). More than 1.5 million people live in the Krasnoyarsk agglomeration.
A large transport and logistics center. The main branches of the economy are non-ferrous metallurgy, hydropower, space industry and other engineering, chemical, woodworking, education.
A large scientific and educational and sports center of the country - in the Siberian Federal University alone there are more than forty thousand students; more than one hundred and fifty thousand students study in the city. Krasnoyarsk Scientific Center of the Siberian Branch of the Russian Academy of Sciences, Krasnoyarsk Regional Innovative and Technological Business Incubator, Krasnoyarsk Biathlon Academy, Krasnoyarsk Academy of Winter Sports.
The Siberian Regional Center of the Ministry for Emergency Situations of Russia is located in Krasnoyarsk. The Siberian region within the boundaries of the military-administrative division was created within the framework of the implementation of the Decree of the President of the Russian Federation of July 27, 1998, No. 900 "On the Military-Administrative Division of the Russian Federation".
Under the control of the Siberian Regional Center EMERCOM of Russia is the safety of the livelihoods of the population of twenty-seven subjects: twelve Siberian, six Ural and nine Far Eastern. This is seventy-five percent of the territory of the Russian Federation. 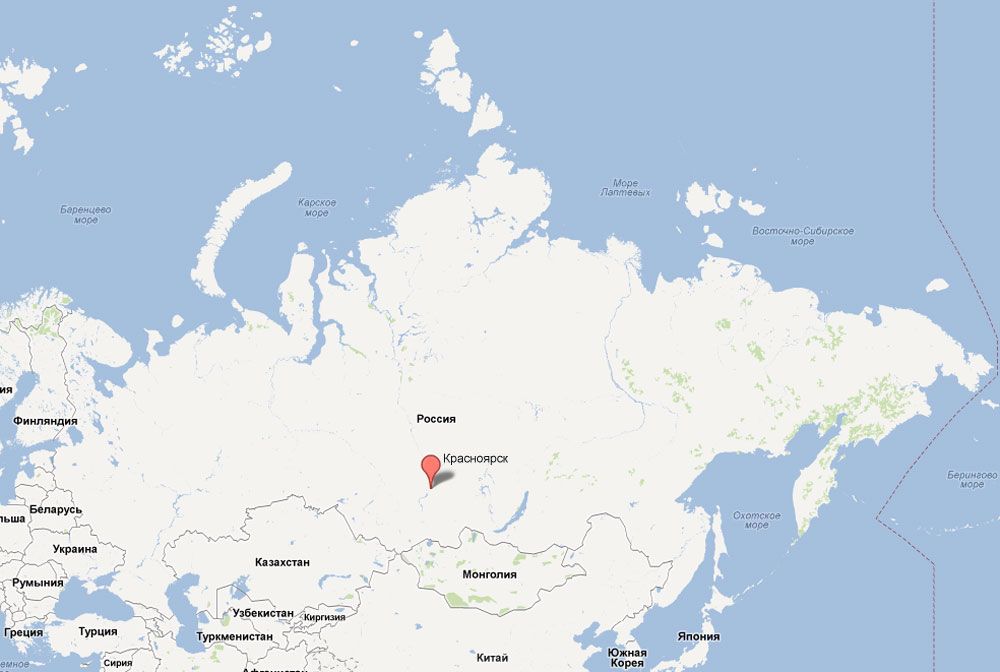 Krasnoyarsk is the largest cultural and economic center of Central and Eastern Siberia, the administrative center of the Krasnoyarsk Territory (the second largest region in Russia). The city is located on both banks of the Yenisei at the junction of the West Siberian Plain, the Central Siberian Plateau and the Sayan Mountains, in the basin formed by the northernmost spurs of the Eastern Sayan. Height above sea level - 287 meters. It is the largest city in Eastern Siberia and the Far East. The Yenisei, on which Krasnoyarsk stands, divides Siberia into the Western and Eastern regions, the city itself is roughly divided, and the last Sayan Range also entered the line of Krasnoyarsk. Economically, geographers include Krasnoyarsk to Eastern Siberia - the city is the center of the East Siberian economic region.
Krasnoyarsk is one of the most compact cities with over a million population in Russia. From west to east the length of the city is (according to the shortest route along the streets) about 41 kilometers, from north to south - almost 37 kilometers.

The climate of Krasnoyarsk is moderately continental; softened by large water masses (Krasnoyarsk reservoir), the ice-free Yenisei and the surrounding mountains in winter. Winter is not very snowy, with frequent thaws.

Within the city there are six transport bridges across the Yenisei River (from the west to the east): Nikolayevsky Bridge, Zheleznodorozhny - two Transsib Railways located nearby, Kommunalny, Oktyabrsky, Korkinsky Bridge (bridge "777") - combined road and rail. Further, in the immediate vicinity of the city's border, there is an automobile bridge across the Yenisei, which connects the transportation route around Krasnoyarsk. On Tatyshev island leads a cable-stayed pedestrian bridge (Vinogradovsky Bridge).
The Trans-Siberian Railway passes through the city, the railway communication Abakan-Taishet, Achinsk-Abakan, Krasnoyarsk-Boguchany, Achinsk-Lesosibirsk. Krasnoyarsk Railways carries 3.2 million passengers in long-distance traffic and 13.3 million in suburban transport.
Krasnoyarsk Hydroelectric Power Plant - currently the second largest power plant (after Sayano-Shushenskaya) in Russia, is located in the suburbs of Krasnoyarsk, Divnogorsk.
The first tower is the tallest building beyond the Urals.
Troitskoye cemetery - the oldest (of the surviving) in Krasnoyarsk.
The Black Hill is an extinct volcano, located in the Beryozovsky district of the Krasnoyarsk Territory, in the immediate vicinity of Krasnoyarsk.
A large number of fountains (more than two hundred) and sculptural compositions.
The first in the RSFSR children's railway was opened in 1936 in the Park of Culture and Rest. M. Gorky.
Every day at exactly 12 o'clock on the guard mount a cannon shoots.
Tap water in Krasnoyarsk is one of the best in the country; For several years in a row it was awarded the highest marks (silver and gold medals), the enterprise was issued a certificate that water from water intakes is suitable for industrial filling without any water treatment. 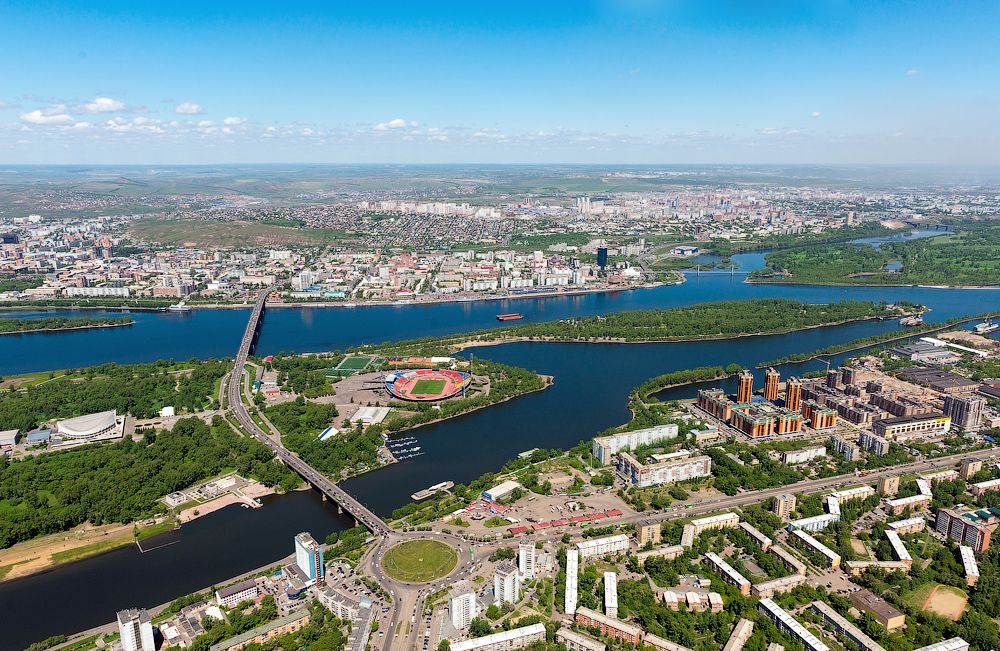 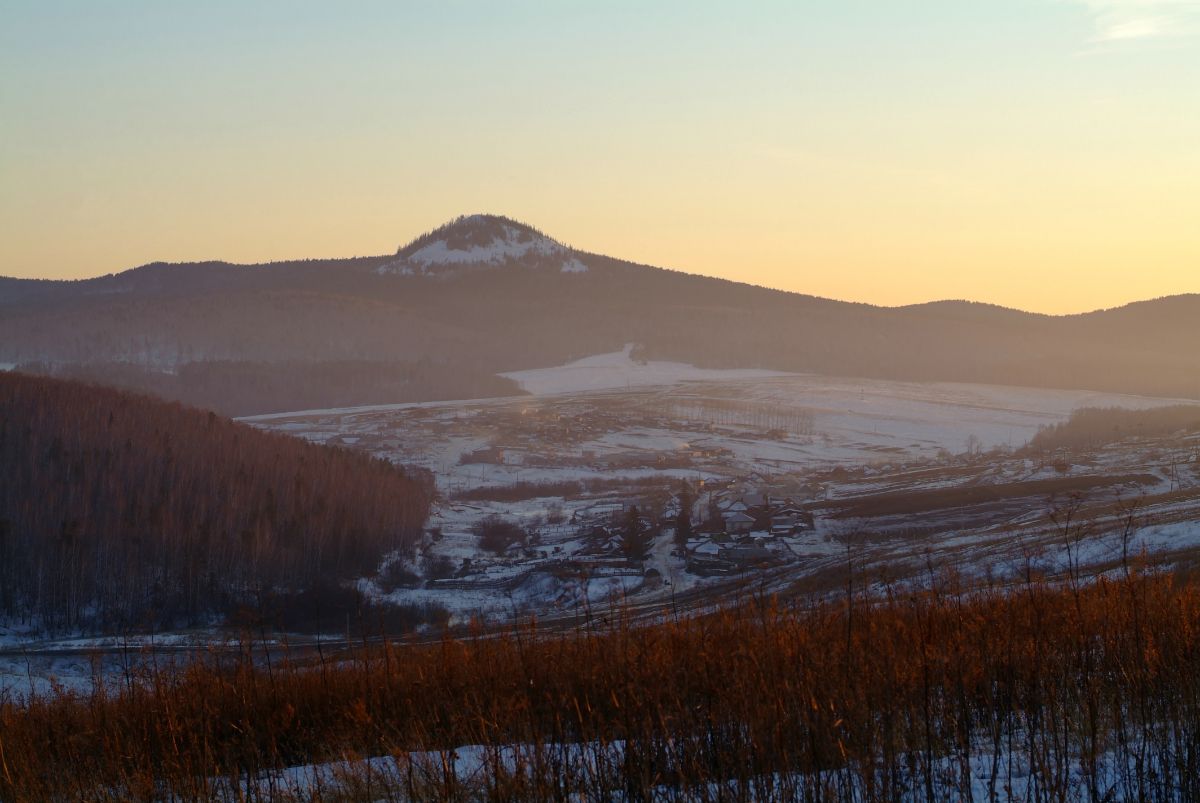 The Black Hill is a subvolcanic intrusion, which is a stock of early Devonian, according to accepted data, age. It is not an active volcano. On the Black Hill there is a deposit of diorite used in construction. Flora has one thousand thirty-seven species of higher vascular plants, two hundred and sixty species of bryophytes; more than one hundred and fifty species are classified as specially protected. The fauna is represented by fifty eight species of mammals.