The original version of the investigation: Mansi was killed!
Now we only emphasize once again that the investigation mistakenly believed that the "Dyatlovs" moved up to 17 hours and only at this time (or later) they set up the tent. The investigation believed that at six o'clock in the evening the group began to prepare for bed: the tourists inside the tent began to pull off their ski boots and felt boots, remove their quilted jackets (later found on top of backpacks, but under blankets), someone quickly wrote "Vechernik Otorten" and someone began to cut the loin ... But then something happened that forced tourists to run down the slope undressed and stripped, risking freezing in the night forest. They acted this way only because above them, on the slope, they were expecting a certain death. In other words, the flight gave a chance for salvation, but the stay near the tent guaranteed death.
What could be the very "something" that could induce nine adult men and girls to tear the roof of their only shelter into rags and run away into the freezing darkness?
The avalanche was rejected by all experienced tourists who visited the slope of Holatchahl in February-March 1959 (including the Moscow masters of sports). And there were no traces of that at that time. There were no natural disasters, such as earthquakes, in this region. So Ivanov did not have a lot of possible candidates for the role of the frightening "something" investigator - such could be those who fled from the places of detention criminals and inhabitants of local forests, hunters-mansi, who for some reason are unfriendly to city residents.

Mansi is a small people in Russia, the indigenous population of the Khanty-Mansiysk Autonomous District. The nearest language relatives of Khanty. Habitat North Ural. 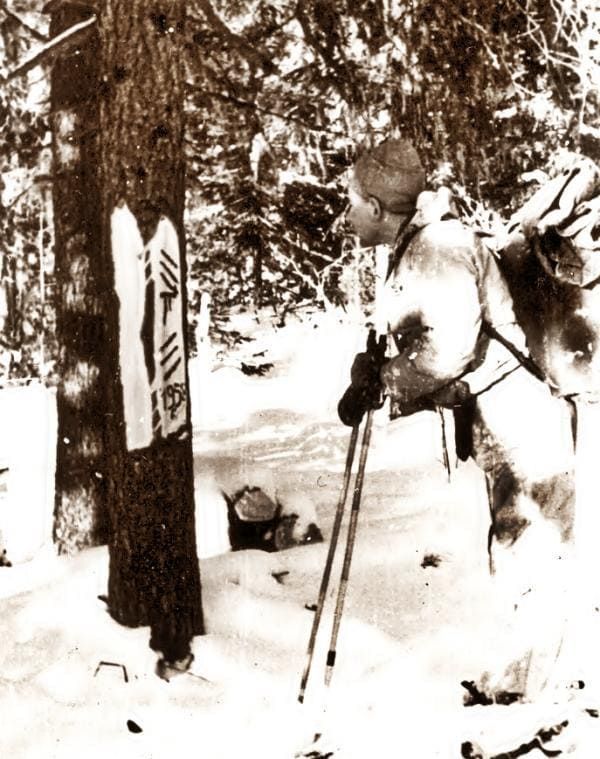 Mansi signs on the way of the Djatlov group

The audit showed that from the objects of the Ivdel ITK shoots in January 1959 was not recorded, the entire "special contingent" was in its place and therefore the prisoners with all their desire to harm the students could not. Therefore, it is not surprising that, following the results of the two-week investigation, the version of the murder committed by the evil Mansi hunters, who were in the area of ​​the Holat-Sahyl mountain on February 1, began to prevail.
According to the memoirs of the participants of the search operation, prosecutor-criminal Ivanov, barely seeing the cut tent, started talking about the murder, and these investigators conducted conversations at different times with different people. The version of the investigator was confirmed by a number of discoveries and guesses connected with the stay of Mansi in the Northern Urals.
First of all, the investigation established the fact of the location of the Mansi plague to the north-east of the site of the Djatlov group. Moreover, it turned out that Sverdlovsk tourists placed their tent just a few tens of meters above the Mansi trail that led to this plague. In other words, the meeting of the hunter-mansi (or a group of hunters) with tourists who stopped for the night seemed quite probable. If the young townspeople behaved incorrectly with the forest dwellers, showed disrespect or offended somehow their tradition, then ... then the investigation presumed the most terrible. In any case, a verbal quarrel could well provoke a sharp conflict, during which the furious hunters attacked the students, hacked the tent with knives, and the uninvited guests caught in the cold drove down the slope. Frost and the lack of shoes and hats for tourists, predetermined a fatal outcome.
Suspicions of the Mansi hunters, it seems, were confirmed by reference to some archaic religious rituals kept by this people. Many local residents, not to mention experts in local lore were aware of the sacred places of Mansi, scattered throughout the Northern Urals mysterious prayer stones and the temples of the pagans. In general, all this sounded mysterious, it is not entirely clear to Soviet atheist prosecutors, and therefore, apparently, these stories found a warm response in the hearts of the best representatives of domestic law enforcement. And therefore, it should not be surprising that the first (and in fact the only) version of the clear version, voiced during the official investigation, was a hypothesis about the involvement of certain hunters-Mansi to the death of tourists.
It is impossible not to note the "ideological correctness" of this kind of suspicion. Many of us, who live in the 21st century, assertions about the planting of an atheistic ideology by the state may seem exaggerated and even unreliable, however, the Soviet authorities really persecuted believers of various religions throughout their existence. Periods of relative tolerance for believers were replaced by a hysterical activity of the state power aimed at eradicating all religious cults. In 1958, another wave of this kind of activity arose, and it was on the rise ... It is well known how Nikita Khrushchev fervently promised that "our generation will live under communism." But we should not forget the other delusional promises of the General Secretary of the CPSU Central Committee: "In the eightieth year I will show everyone the last priest!"

In 1958, just on the eve of Igor Dyatlov's group campaign, the Council for the Affairs of the Russian Orthodox Church, founded by Stalin, published an infamous atheistic pamphlet by the former teacher of the Odessa Seminary E. Duluman, in which both Orthodoxy and the universal religious tradition were mockingly portrayed in a broad sense . It is no exaggeration to say that since the time of Yemelyan Yaroslavsky such ideological findings, atheist propaganda in the USSR did not have. In the same year, the all-Union mass media published statements by the archpriests of the Russian Orthodox Church P. Darmansky, A. Spassky and Chertkov about the abdication of God. The ideological order of the Government was clear - to the 21st Congress of the CPSU (recall, it was he who was dedicated to the campaign of the group Dyatlov) was to show the Soviet people examples of the victorious movement of the atheistic worldview in the broad masses of society.

Therefore, the suspicion that the religious fanaticism of Mansi professing some kind of dense totemic religion, provoked the murder of young atheist students, fell on the most fertile soil. Recall that the investigation was under the control of the Sverdlovsk Regional Committee of the CPSU, and therefore the "ideologically correct" version could not but cause hot support. Moreover, the case of the murder of a person who inadvertently violated the limits of the sacred zone of Mansi, seems to have a historical analogue. At least, it was the involuntary desecration of the Mansi shrine that accounted for the murder in the thirties of a certain female geologist attributed to Mansi. What kind of crime was it, what were its true motives (and whether it had a place at all) is not really known, perhaps in this case there is some kind of aberration of historical memory, but nevertheless this case was said to be unquestionably reliable.
Whatever it was, the murder, committed a quarter of a century before the death of Igor Dyatlov's group could not have a direct relationship to what happened on the slope of Holat-Syahyl. In the materials of the criminal case, which is now quite well known due to the great work done by Evgeny V. Buyanov, the St. Petersburg researcher of the "woodpecker" tragedy, one can see protocols of interrogations in which the investigators repeatedly touch upon the "religious Mansi" theme. The answers, though somehow confirming the version about the existence of "prayer stones", "sacred places" or, let's say, ritually meaningful objects for Mansi, were not received in the vicinity of Kholat-Syakhyl. The interrogated or answered evasively, demonstrating obvious ignorance in this matter, or on the contrary, quite definitely claimed that such places are located in a completely different area.
One can not help but mention that there were also quite weighty considerations, against the "Mansi trail." It was hard to imagine that the Mansi, who drove tourists from the mountain, did not loot the property thrown by the fugitives. If felt boots or cameras did not have a special value in the eyes of forest dwellers, then they would hardly have spilled alcohol. Mansi is well acquainted with medical alcohol and they know the price. In places far from civilization this is literally "liquid money". However, ordinary Soviet money for Mansi would also be a superfluous trophy. Recall that in the things left in the tent, it was found quite a significant amount of money (only 1685 rubles.) In those days, you could buy a TV for such money, and a salary, for example, a teacher was 400 rubles a month. In addition, in the pocket of Rustem Slobodin there were 310 more rubles. It was hard to believe that the Mansi would ignore such prey. And just to find it, they would have been quite enough for three weeks, which has passed since the group died before the search engines appeared.
However, alcohol and money remained untouched ...
Nevertheless, this contradiction did not particularly embarrass investigators, at least at the first stage of the investigation. The temptation to "hang" the loss of tourists on the local Mansi was too great. Several young hunters-mansi in the framework of the investigation conducted by the regional prosecutor's office were detained in March and intensively interrogated. It is difficult to say what would be the fate of these people, since the ability of the Soviet "machine of justice" to obtain the necessary testimonies is confirmed by the whole history of its existence, but the investigation in the second half of March made an unexpected zigzag.