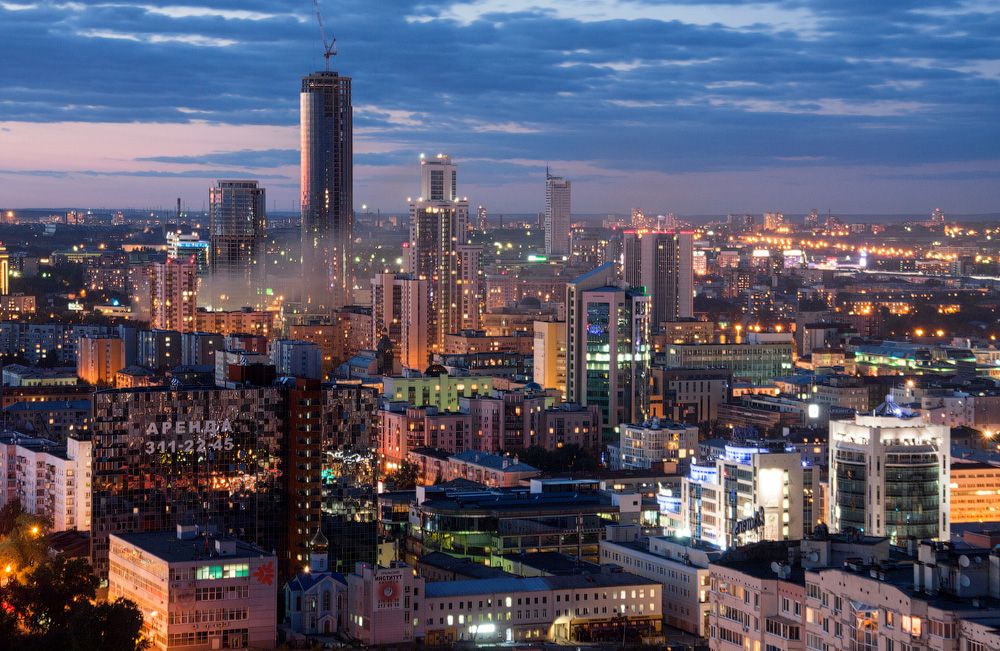 Meet Ekaterinburg - the largest cultural, industrial, economic center of Russia! Founded in 1723 as a city-factory, Yekaterinburg for its history was the center of the Ural mountain district, the capital of the Ural region (which united giant lands from the Arctic Ocean to Kazakhstan), a closed military city and even the capital of the virtual Ural republic!
The famous dam of the 18th century, the bizarre mansion of the merchant Sevastyanov, the famous Temple on the Blood, the mysterious manor of Rastorguev-Kharitonov, the romantic Literary Quarter - here is not a complete list of the unique corners of Ekaterinburg. You will learn on our excursion how the city dam was made whether the merchant Sevastyanov in cast-iron galoshes, why in one of the prestigious neighborhoods of Ekaterinburg they built apartments without kitchens and what is in the center of the World.

The excursion ends with a visit to the viewing platform of the skyscraper "Vysotsky". In any weather here you can look at the city in the height of a bird's flight !!! 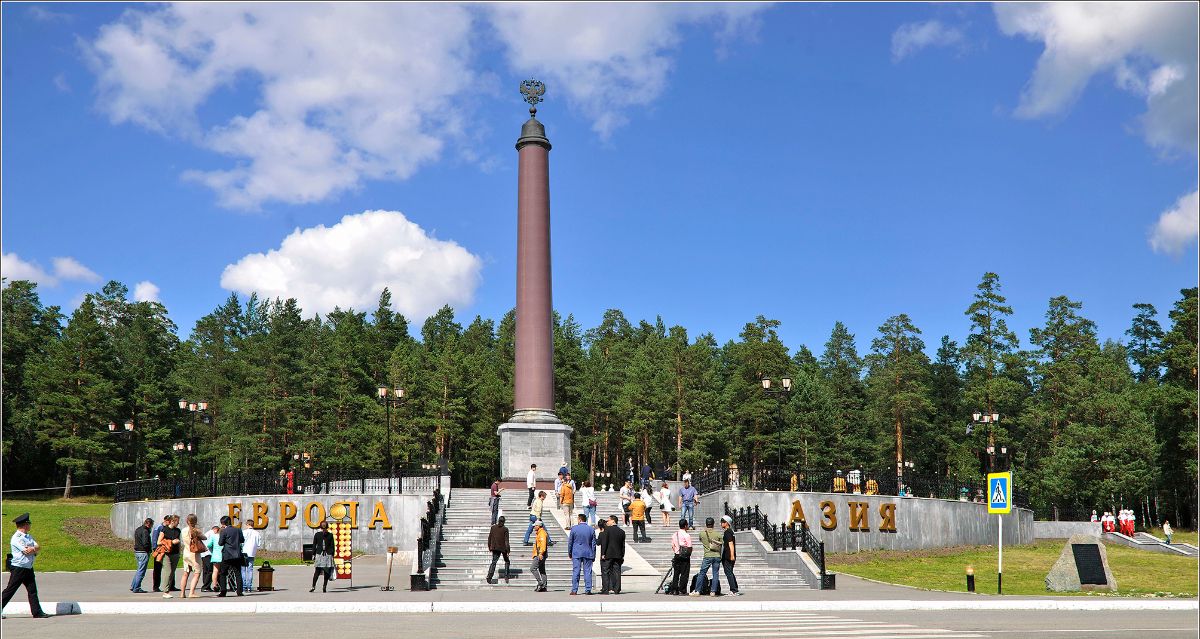 The Urals are proud to be at the junction of two parts of the world. True, the exact location of the border between Europe and Asia has not yet been found. Back in the 18th century, Vasily Tatishchev, one of the founders of Yekaterinburg, suggested that this feature is the backbone of the Ural Mountains. In August 2004, 30 km from Ekaterinburg, at the crossing point of the European-Asian border, the symbol "Europe-Asia" was installed. At the base of the symbol are two stones, symbolizing the unity of two parts of the world: one was brought from the extreme point of Europe - Cape Rock, the other - from the very edge of the Asian part of the continent - Cape Dezhnev. Ural guides say: none of the tourists perceive the border of Europe and Asia indifferently. He is a symbol of open space, the synthesis of two civilizations The history of scientific fixation of the border of Europe and Asia on the Ural watershed is 300 years old. The merit in this belongs to a prominent statesman, a famous historian and encyclopedist, the first explorer of the Urals and one of the founders of the city of Yekaterinburg, VN. Tatishchev. 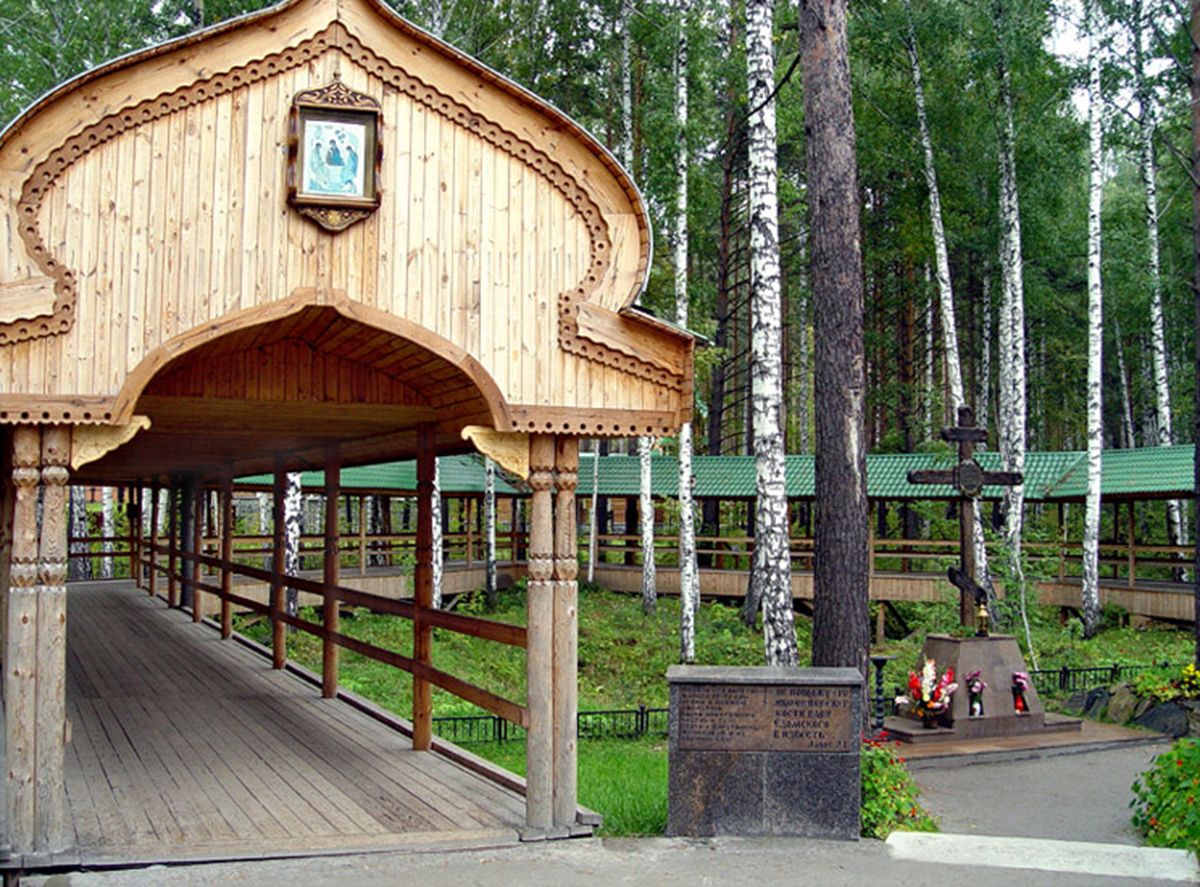 Ganina Yama is called the abandoned mine near the "Four Brothers" tract. In the XIX century, iron ore was extracted here. Nowadays only a small quarry and dozens of forest-covered mines have remained from the fields. The place is famous, first of all, because here the bodies of Nicholas II and his family were destroyed after the execution. Today, the site of the mine is the abode of the Holy Royal Passion-Bearers, founded in 2000.

Much has been written about the mystical meaning of the murder of the Tsar-martyr Nikolai. The murder of the Russian Orthodox Tsar - the anointed of God - caused irreversible changes in the spiritual atmosphere of the whole world.

And from all over the world people go to worship the places where the last days of the Great Monarch and his family have passed.

Our itinerary will begin with a short sightseeing tour around the city with a visit to the majestic Temple-Monument on the Blood. It was erected on the site of the engineer Ipatiev's house, in the basement of which the Tsar's family was shot.

Then we will go to the tract Four Brothers, where the remains of Tsar Nicholas II and his family were dropped into the abandoned Ganin Yama mine.

At this place, a unique Orthodox monastery is built and operates. On its territory you will see 7 wooden temples of extraordinary beauty. At dusk, the entire monastic city, as if lost in the forest, seems fabulous. 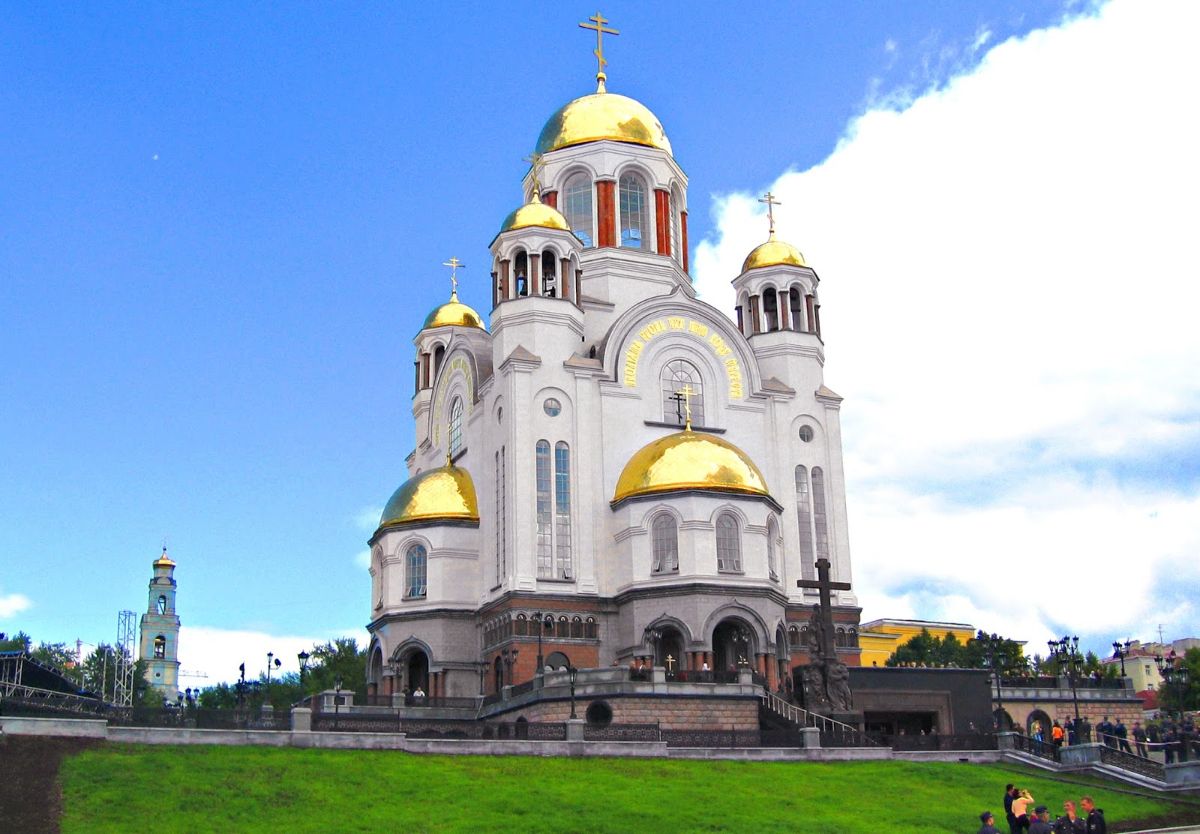 The temple was erected in the 2000s on the site where in 1918 the Bolsheviks shot Emperor Nicholas II and his family. Earlier here stood the mansion of the engineer Ipatiev, where the crowned people spent the last days of their lives. The church was built in the Russian-Byzantine style according to the project of several architects. At present, it is a pilgrim center for believers from all over Russia and Orthodox from abroad. 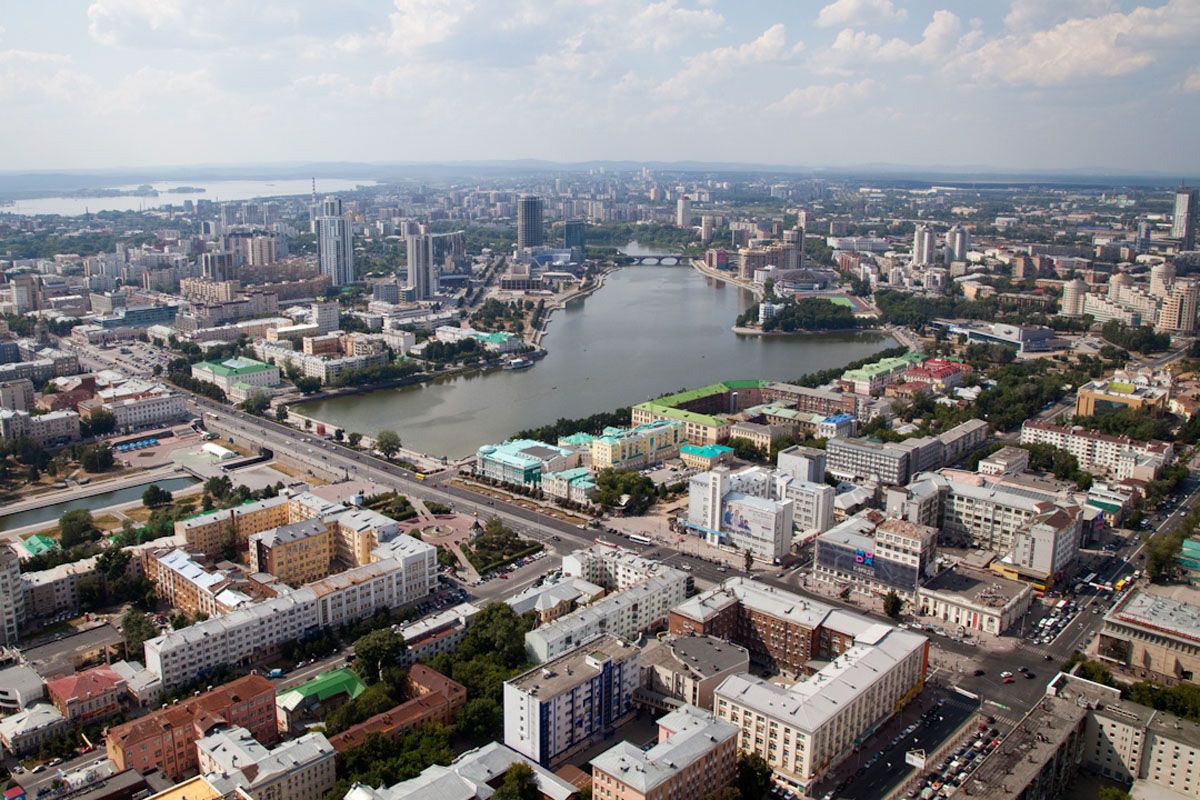 The viewing platform, which offers a beautiful view of Yekaterinburg, is located in one of the tallest buildings in Russia - the skyscraper "Vysotsky". It is located on the 52nd floor, which is approximately at an altitude of 186 m. According to the information given by the administration of the skyscraper - visibility is 25 km! 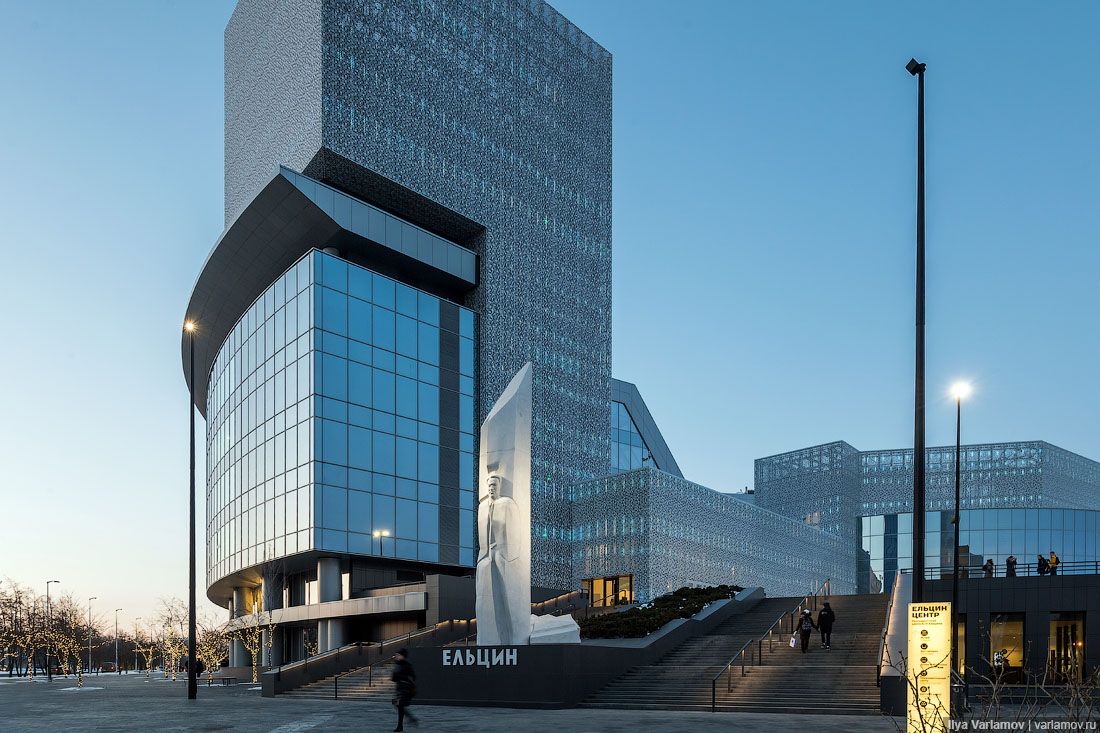 In 2015 the "Presidential Center of Boris N. Yeltsin" opened in Yekaterinburg. This project unites the Museum. the first Russian president, as well as many interactive programs dedicated to the contemporary political history of the Russian Federation. Activities of the center are funded by non-governmental organizations. 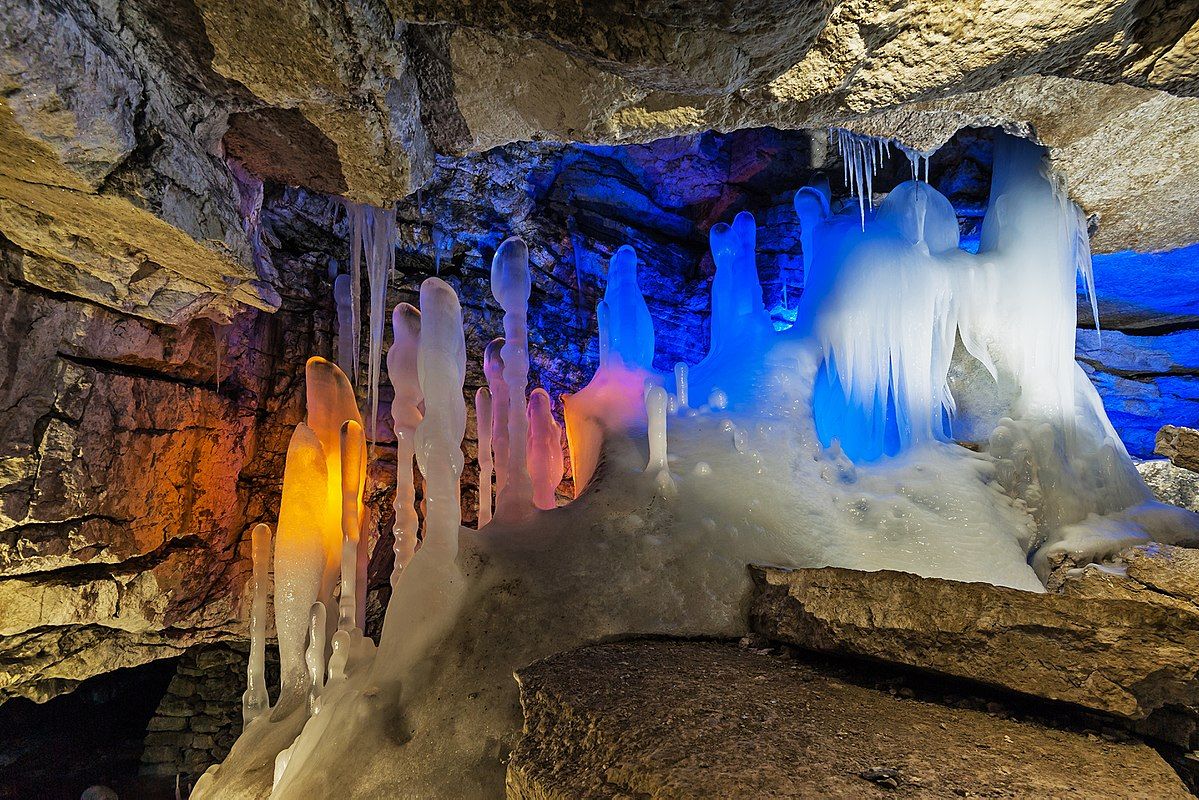 Kungur Ice Cave is one of the most popular sights of Siberia and the Urals. A unique geological monument is one of the largest karst caves in the European part of Russia, the seventh largest gypsum cave in the world. The length of the cave is about 5700 m, of which 1500 m is equipped for visits by tourists. The air temperature in the center of the cave is from +5 ° C to -2 ° C, relative humidity in the center of the cave is 100%. Kungur cave contains 58 grottos, 70 lakes, 146 tons. "Organ pipes" (the highest one - in the grotto of the Ethereal, 22 m) - high mines, reaching almost to the surface. She is more than 10-12 thousand years old.